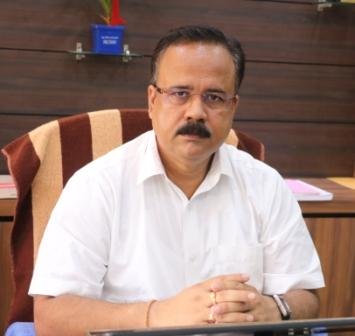 Dr. Hari Chandra Mahanta had joined Department of Anthropology, Dibrugarh University, Dibrugarh as a Lecturer in the year 1994. He obtained his Master’s degree from Department of Anthropology, Gauhati University, Guwahati and completed his Ph.D. in Anthropology, Gauhati University in 1996. He also did Master of Business Administration from IGNOU in 2015. Dr. Mahanta had joined as Deputy Controller of Examinations in Dibrugarh University in the year 2003 and subsequently in the year 2012 he had joined as the Controller of Examinations. In the year 2018, August he has joined as the Registrar, Dibrugarh University. He was also the first coordinator of Directorate of Distance Education, Dibrugarh University established in the year 2002 and the first Member Secretary of CEE (Combined Entrance Examination, 2007) Cell for Medical & Engineering Entrance Examination conducted by Dibrugarh University. He was the man behind the examination reforms in Dibrugarh University. In the year 2011, Dibrugarh University introduced Semester System in undergraduate Programme and Dr. Mahanta was entrusted the job of Semester examinations independently. He is presently a life member and founder member of 2 professional bodies of Anthropo-Archaeological research viz. Indo-pacific Prehistory Association, Australian National University, Canberra, Australia; Society of South-Asian Archaeology, Deccan College Postgraduate and Research Institute (Deemed University), Pune respectively. He has published more than 20 (twenty) research papers in national and international referred journal and presented 5 (five) research papers in international conference (IPPA Congress in Taiwan, 2002, Philippines, 2006, Vietnam, 2009, Cambodia, 2014 and World Archaeological Congress, Poland in 2007, in addition to contributing articles in leading journals and books. He has been awarded Education Excellence award by Confederation of Indian Universities, (International Felicitation) New Delhi in 2019 for his outstanding contributions as Educator. He also has immense experience in travelling to Taiwan, Thailand, Malaysia, Singapore, Cambodia, Vietnam, Philippines, Poland, Finland, France and Japan.